God Is Closer Than You Think 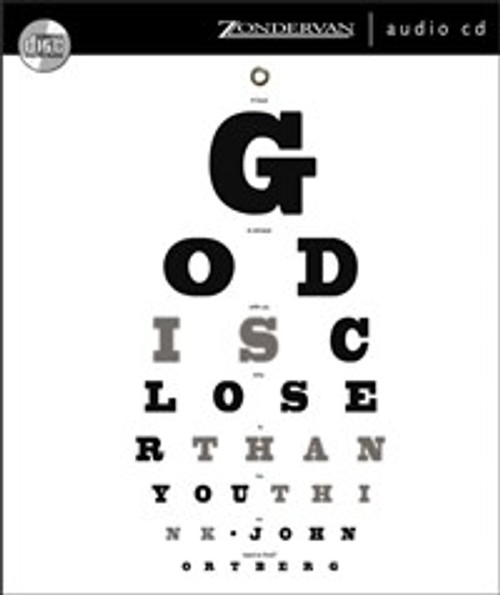 There are two works of art that help me think about the presence of God. The first is the painting of God on the ceiling of the Sistine Chapel. Apparently one of the messages that Michelangelo wanted to convey is Gods great desire to reach out to and be with the person he has created. If you look carefully at the painting, you notice that the figure of God is extended toward the man with great vigor. He twists his body to move it as close to the man as possible. His head is turned toward the man, and his gazed is fixed on him. Gods arm is stretched out, his index finger is extended straight forward; every muscle is taut. It looks as if even in the midst of the splendor of all creation Gods entire being is wrapped up in his desire to touch this man. His hand comes within a hairs breath of the hand of the man. God is as close as he can be. But having come that close, he allows just a little space, so that Adam can choose. He waits for Adam to make his move. Adam, for his part, reclines in a lazy pose, leaning backward as if he has no interest at all in making a connection. He doesnt move forward, he doesnt hold out his hand, he doesnt lift a finger. He appears to be indifferent to or even unaware of the possibility of touching his Creator. All it would take is the slightest effort, the merest movement. This picture says that the great desire of God is to be with the human beings he has made in his own image. This picture reminds usGod is closer than we think. He is never farther than a prayer away. All it takes is the barest effort, the lift of a finger. But I also remember another, humbler work of art. It involves a series of books all centered around the question Wheres Waldo? Waldo will never make it to the Sistine Chapel. He looks nothing like the majestic deity of Michelangelo. He is a geeky-looking, glasses-wearing nerd with a striped shirt and goofy hat. Waldo is supposed to be on every page. Whoever writes the book claims that it is so. But you couldnt prove it by me. Hes often hidden to the untrained eye. You have to be willing to look for him. When you find him, there is a sense of joy and accomplishment. Surely Waldo was in the place, and I knew it not. In fact, developing the capacity to track him down is part of the point of the book. If it was too easyif every page consisted just of a giant picture of Waldos faceno one would ever buy it. The difficulty of the task is what increases the power of discernment. Part of what makes it hard to find Waldo is that he is so ordinary-looking. On some pages, hes surrounded by hundreds of look-alikes; Waldo-wannabees. He just seems to just blend in. You can be looking right at him without even knowing it. Wheres Waldo? Why doesnt he show himself plainly? Why does he hide his face? He may not be absent, but he is elusive. He is Waldus absconditusthe Waldo who hides himself. Let every dayevery momentof your life be another page. God is there, the Scriptures tell uson every one of them. But the ease with which he may be found varies from one page to the next. So lets explore the truth found in both of these works of art: God is closer than you think.
×

God Is Closer Than You Think Video Study

You Matter More Than You Think

Closer Than You Think:

God Is Closer Than You Think Participant's Guide

God Is Closer Than You Think